Add the water to the container and dissolve the salt in it. Connect the electrodes to the running generator and then submerge them in the water. To avoid a short circuit do not let them come into contact with each other. At this point, a chlorine-smelling gas should be released. Now move the magnet closer to the electrodes and watch what is happening next (observe changes that occur when the magnet is placed in different positions).
Experiment with colourless table salt
Experiment with ink-dyed water

The water starts to move. This is due to the concentration of the Laplace force, which represents the vector product of the current density in the conductive saltwater (proportionally to intensity) and the magnetic field.
When the polarity of the magnet is changed, the water “flows” in the opposite direction. The movement of the water will cease when the magnetic field is no longer perpendicular to the current. One can also observe, that the water’s flow rate increases when the voltage is increased (and therefore the intensity according to Ohm’s law U=R*I). The same result is achieved when the magnet is moved closer to the electrodes.
Comment: Certain metals can oxidise due to electrolysis and thus quickly contaminate the water. Do not leave the magnets nor the electrodes in the water for too long in order to prevent surface corrosion. This same principle (of magnetohydrodynamics) is being used for the Yamato-1, a vessel prototype created in Japan. It uses superconducting coils instead of magnets.

SMOT - Speeding up a sphere in magnetic channel 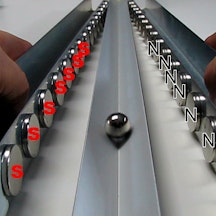 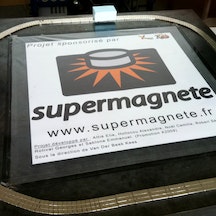 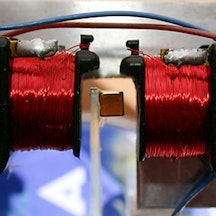